Middlebury, Vermont – January 4, 2016 – The climbing will be no less challenging, the views every bit as breathtaking, and the post-ride party kicked up a notch. The third Vermont Gran Fondo, named one of the U.S.’s Top 10 Gran Fondos by GranFondoGuide.com, is set for Saturday, June 4, 2016 and promises several new twists on a familiar and popular theme.

After two editions that challenged cyclists from all over the world, as well as a 2012 Olympian, with the daunting “LAMB” ride—the Lincoln, Appalachian, Middlebury and Brandon gaps in succession—the Green Mountain State’s premier cycling event will mix things up this summer.

Repaving on Routes 125 and 73 will reduce sections of the Middlebury and Brandon gaps to gravel, so organizers have paired Roxbury Gap and Moretown Mountain with the Appalachian and Lincoln gaps. All told, the 2016 Gran Fondo route will make for 105 miles and more than 10,000 feet of climbing—yet again, a quadruple-gap century ride. And the course’s final ascent will take cyclists up the eastern slope of Lincoln Gap, with 24% grade that’s purported to be the steepest paved mile in the U.S. 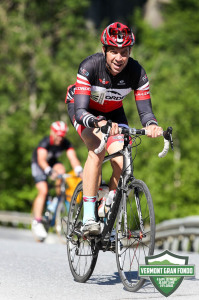 “We have too much respect for the Vermont Gran Fondo’s many friends and their finely-tuned equipment to ask them to bike over rugged surfaces,” says event director Sue Hoxie. “So we decided to make a virtue of necessity and give riders a chance to scale two new Green Mountain summits. And they’ll still be ascending Lincoln Gap. Indeed, for Gran riders, a full day of cycling will culminate in that legendary climb.”

To accentuate the Vermont vibe, the Gran Fondo route will lead riders through five covered bridges (in Waitsfield, Warren and Northfield). The new 2016 loop also features many country stores along the route (in Starksboro, Lincoln, Warren, Waitsfield and Northfield) to supplement the usual well-stocked rest stops (atop the App and Lincoln gaps). Roughly 10% of the Gran route will cover iconic Vermont dirt roads, which are hard-packed and easily navigable.

After two years with the start and finish at the Middlebury College Snow Bowl in Hancock and the après-ride party at New Haven’s Lincoln Peak Vineyard, further change is in store. This year the event will begin and end at the Woodchuck Cider House in Middlebury, with the post-ride festival taking place from 3 to 9 p.m. just a short, flat pedal down Exchange Street, on the Green in downtown Middlebury. There cyclists can listen to two live bands and enjoy free admission to both Foodaroo, with its array of popular food trucks, and the Midd Summer Fest, with tastings of adult beverages.

The Medio Fondo will be essentially unchanged from 2015, with 6,800 feet of climbing over 64 miles, including the Appalachian and Lincoln gaps. Piccolo riders will follow a route entirely within Addison County, home to what Yankee magazine has called the best road cycling in New England, covering 43 miles and rising 3,700 feet as they go from Middlebury to Bristol and Lincoln, then back again.

This year Gran and Medio riders will start at 9 a.m., and Piccolos at 11 a.m., to minimize the time gap between first and last finishers.

The fee is $110 for the Gran distance, $100 for Medio riders and $75 for Piccolo riders. Rates increase on February 1st and again on May 16th. Riders on all three routes will be supported by mechanics and sag wagons from local bike shops and bicycle touring companies. All entrants are invited to pick up their registration packets and receive a complimentary bike check at Woodchuck Cider House from 3 to 6 p.m. on Friday, June 3rd or the morning of the ride starting at 7 a.m. With registration, participants also receive professional ride-day photography; custom-designed cycling socks; and entry to the après-ride party. Vermont Gran Fondo cycling jerseys and shorts may be purchased at additional cost.

A gran fondo, named after the Italian phrase for “great endurance,” is a one-day bicycle event first popularized in Europe that emphasizes participation over competition. It’s typically characterized by a festive atmosphere, camaraderie, and post-ride food and drink.

For more information and to register, go to www.VermontGranFondo.com.
Event Sponsors
The Vermont Gran Fondo wouldn’t be possible without founding sponsors VBT Bicycling and Walking Vacations, bMighty2 and the Addison Independent; and event sponsors Vermont Hard Cider Company, Better Middlebury Partnership, Discovery Bicycle Tours, and the Addison County Chamber of Commerce. Sponsorship opportunities are still available.
About the Vermont Gran Fondo Organizers
The Vermont Gran Fondo is produced by Cycle Addison County, Inc., which is chartered to support cycling in the region through programming, education, infrastructure, and equipment. Its members include cycling enthusiasts and athletically inclined tourism and business development representatives.

Stay in the know.