Real Misery In The Green Mountains

By Paul Ruchlin from his BLOG 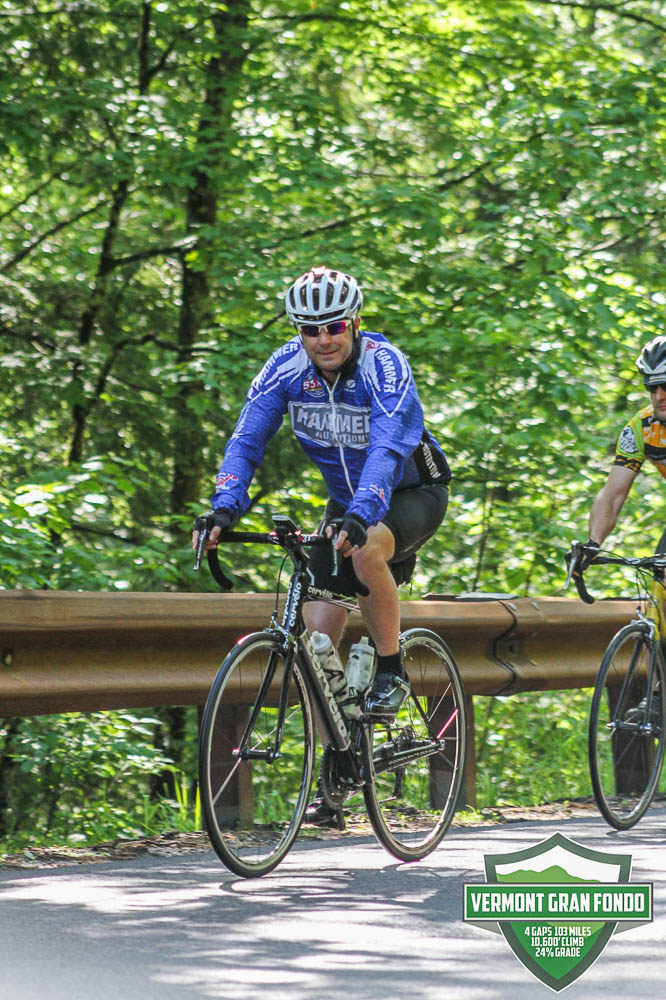 I’m sorry Virginia, but the REAL Mountains Of Misery are in Vermont.  At least for the east coast that is.  Mountains Of Misery, that fantastic ride near the Shenandoah front range and Blacksburg is an amazingly beautiful and challenging ride with an excruciatingly difficult finish.  Vermont Gran Fondo is, quite simply, BRUTAL.

Let me admit that I came to the Vermont Gran Fondo a scant 5 days after riding 103 miles in the Ocean State Tour De Cure.  I was to learn that despite feeling great in between, 5 days is not enough time for my legs to fully recover and so I left the starting line with something less than a full tank.  This however is not reason enough to change my appraisal that VTGF was the hardest ride I’ve done.

I  based myself in the town of Middlebury, VT another wonderful little New England   town with spired church, some great restaurants and the ever so famous Woodchuck Cidery where packet pick-up was held.

I have been blessed with really terrific weather for all of my state rides and this one was no exception.  It had poured down rain during the night but I awoke to a somewhat sunny sky, about 58 degrees at the start and forecast to reach 80 with plenty of sunshine and only a light breeze.  PERFECT.  It was chilly at the Middlebury College Snow

Bowl start, especially when the sun ducked behind the clearing clouds, and not much chance to “warm up” with 10 miles of downhill to start the ride.

Only a few minutes after hitting the valley my wind shell came off.  In retrospect I should have just sucked it up and been cold for the first little bit, but cold tends to by my Kryptonite and I avoid it as much as possible.  It was not a big deal to just stuff my shell in my pocket for the next 93 miles.

VTGF is also know as the LAMB ride because it is comprised, on the Gran (103 mile) route, of climbs over Lincoln, Appalachian, Middlebury and Brandon Gaps.  All respectable ascents in their own right, the combination of all four, along with a couple of other lesser but energy sapping climbs, is what makes this ride so difficult with 10,000+ feet of climb.  Lincoln Gap alone, advertised to have the steepest continuous mile in the US at 20%-24% grade, is a killer all on its own, but I’ll get to that later.  I wasn’t sure of which came first (you do not ride them in L. A. M. B. order) but I did know the first was near mile 20.  I settled in to a comfortable pace, enjoying the countryside views and preparing for the task ahead.

I’ve said before I’m not as fearful of downhill speed as most others, or perhaps as much as I should be, so starting in the first wave of riders and barreling down the mountain as fast as I dared on the still wet roads put me near the very front of the pack by the bottom.  I didn’t expect to stay there so it was no surprise when riders began passing me, and passing me, and passing me.  I thought more than once that either these folk are in incredibly good condition or they were riding awfully fast at this point, having 10,000 feet to climb ahead of them.  I was averaging 18-19 mph here and being passed by everyone, and I mean EVERYONE.  I worked quite hard to keep my ego in check, let them all go and stay relaxed at my own pace.

A right turn through the town of Bristol,  stop at the first rest stop to top off my fluids, quick photo op

and the terrain began to rise toward what I thought was Lincoln Gap, the first big climb.  The grade remained pretty gentle, only once reaching anything near double digits.  Maybe this was all going to be over-hyped after all.  And then, I saw the little green sign. 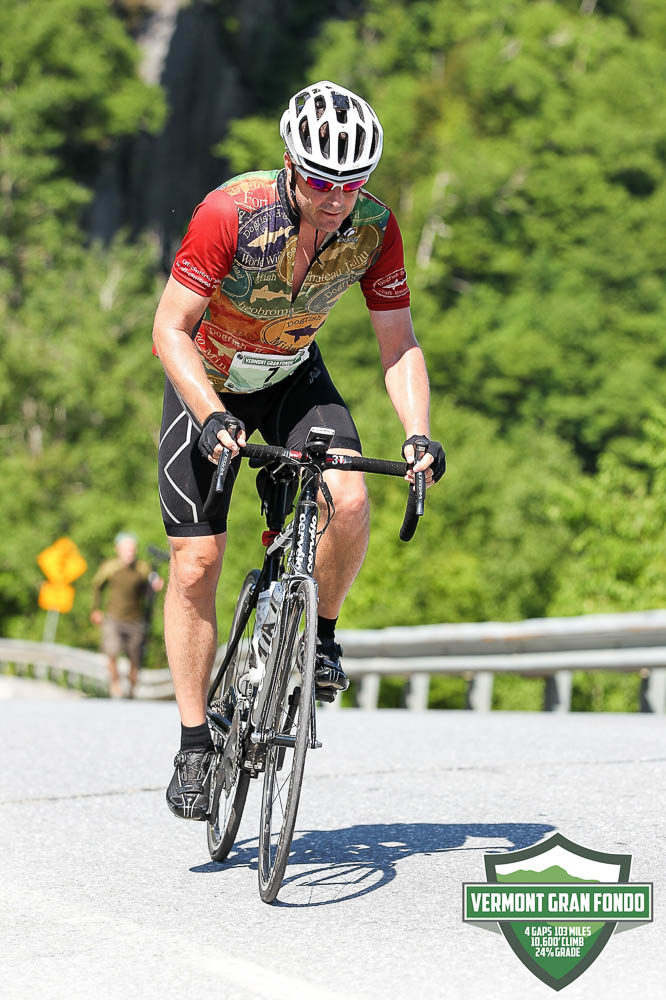 “Strava Start.”   I knew all of the gap climbs were competitive and therefore timed segments.  Not competitive for me, but there is a King/Queen Of the Mountain challenge for each of the climbs and those segment winners are determined by downloading your GPS data to the Strava website.  So, apparently that little 5 mile climb we just went over was…nothing of importance.  And it quickly became apparent why.  THIS climb was not so gentle. Oh sure, it started out that way, but got steeper and steeper as we went.  And it got steeper and steeper all the way to the top, maxing out at 16% for much of the last half mile.  This is where, sometime in that climb, I learned that 5 days is not enough recovery time between 100 mile rides.  I was only at mile 30 and my legs were already telling me they were not so happy.  Uh oh.  It’s also where I learned that I’d just climbed Appalachian Gap, not Lincoln.  Well, that was nice to know too.

And now it was HOT!  Even here at the top it was well into the 80’s.  Luckily, after some food and water, I had the downhill to cool off, and it was quite the downhill.  Very shortly after starting down, and it was nearly as steep down the other side, I glanced down at my GPS to see 58 mph.  Whoa!!!  That blows away my previous top speed of 47 mph.  Unfortunately, I came around a bend and nearly melted my rims trying to brake hard enough to stop from rear ending the car in front of me, not going anywhere near 58 mph.  Uh, I think the speed limit here was 40 mph.  It was a frustrating mile and a half riding and releasing my brakes to keep them from overheating and keep me from hitting that car.  So much so that I did something a little crazy, sweeping to the opposite lane of traffic (I could see far down the road that it was clear of oncoming traffic) and sprinted past them on the inside of a hairpin turn (mile 35.3 on my gps track).  Ok, it was foolish, but it was also a bikeload of fun and quite satisfying.  I don’t think they were too happy.

Next came Lincoln Gap.  Oh my &%)#@%^& GOD!!!!  That little green “Strava” Sign came quickly and then it got really stinkin’ steep really stinkin’ fast.  Thankfully this entire climb is under heavy tree cover keeping the temps down, but that wasn’t enough to keep me from having to, without shame, walk for a bit.  It no kidding easily hits 24% grade.  I ended up walking in two sections for a total of probably 1/2 mile.   The first was only a hundred yards or two.  I got back on and rode a few hundred yards and then walked again, this time for longer.  It was INCREDIBLY STEEP.  At one point I was lucky enough to see Lea Davison, one of our US Olympians from the 2012 London games climb on past me, breathing hard, but looking unbelievably strong. I think I developed an instantaneous crush.  Not much surprise she took QOM for that climb.  A quarter mile or so from the top I was finally able to get back on the bike and ride to the top, praying to any sort of deity or alien life form that the remaining two climbs were nowhere near this hard.

I was assured not, by previous riders, and after a long rest and refuel I mounted back up for the descent.  Just a short way down and around a sharp curve there was a rider down receiving medical attention.  It was probably 15% downgrade here and I can only imagine what trouble he’d gotten into.  He clearly did not take heed of the sign at the top of sharp curves, wet surfaces and impending gravel.  He was in good hands so I did not stop.  Only another 1/4 mile down the road it turned to gravel, which completely ruins any chance of a high speed descent and FUN.  Boooooo!  In fact a majority portion of the next 10 miles was unpaved surface, although well graded and compacted and very rideable.  Not at high speed, but rideable all the same.

One stop and a a trip around Lake Dunmore brought us to the town of Forest Dale and the start of the climb up Brandon Gap.  This ended up being very similar to the climb up Appalachian Gap in distance, grade and difficulty.  It took a near constant mantra of, “I’ve got this” and “You are stronger than this mountain” to get me through the ascent and by the time I got to the top I was gassed.  But I made it.  I dumped half a bottle of water on my head, ate some, drank a lot and got out of the sun for a bit before…….yes…..screaming down the other side as fast as I could go, cooling off and loving the speed.  Finally a big descent where I didn’t touch my brakes once.  It’s like a Bikegasm for me. 🙂

By now I know I have but to suffer through 15 miles and one more tough climb to the finish and by all accounts, the easiest of the four.  The wind was out of the north by this point so the ride back up towards Middlebury Gap, while cooling, was noticeably more difficult.  Then the final turn to the west and after a few miles of flat and gentle grade up, the last two miles of climb began.  True to word-of-mouth, while not an easy climb, it was certainly the easiest of the four, which considering it was miles 101-103 meant my legs felt it just as much as the other three.  And yes, it was consistently into double digit grades the last mile.  Vermont has a knack for keeping the worst for last when it comes to road climbs.

I cannot overstate my feeling of relief and then accomplishment as I passed the the little green “Strava End” sign and the road changed from up to down for the last few tenths to the finish at the Snow Bowl.  Not only was I done with this ride but I’d completed four different 100+ mile rides in a five week span.  That’s no Tour De France but an accomplishment of which I’m proud.  In great need of a rest break, but still proud.

I celebrated that night with a filet and lobster dinner back in Middlebury.  Vermont Gran Fondo is more than worthy of a bucket list ride.  I certainly intend to explore more of the Green Mountain state.  While there, high on my list is another attempt at Lincoln Gap, with legs well rested, just to see if I can.

Stay in the know.